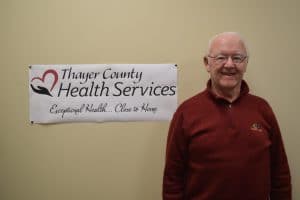 When Eldon Kassebaum of Hebron, NE hurt his back and needed medical attention, he turned to Thayer County Health Services. “Dr. Hubl did everything he could to find out what was wrong with me. When he sat and talked with me, he treated me like a friend.” Eldon is fortunate in his health in that he hasn’t had to spend much time in our facility, but when he arrived on a Saturday morning in March and was admitted as a patient, he was immediately impressed with the level of care he received.  “Whenever I called the nurses station, they came right away, and I know they were busy, but they treated me like I was the only one in the hospital. I couldn’t have asked for anything better from those nurses, they were great,” exclaimed Eldon.

After an X-Ray and MRI at TCHS, Eldon was transferred to Lincoln where he underwent surgery. “They say bigger is better, and well they are bigger, but they are not better. Don’t get me wrong, they were good, but they don’t hold a candle to the staff at TCHS,” said Eldon. During his stay at THCS, Eldon felt right at home. “They went the extra mile from the time I came out here to the time I left. If you want to get good healthcare, have it done right, and feel like you are family, this is the place to go. I can’t think of a word to describe how great they were. I am forever thankful for their care.” 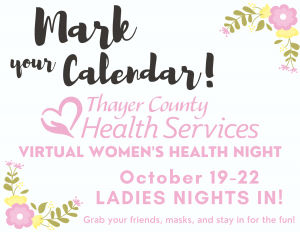