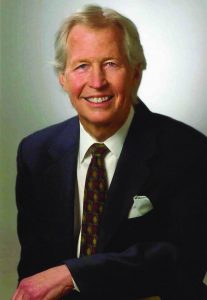 Glenn Korff, Hebron native, never forgot his Nebraska roots or growing up in his hometown. The people of Hebron had a profound influence on Glenn and he attributed his Nebraska values to his strong work ethic and the success he achieved in life.

Glenn as a fourth-generation Nebraskan. His father Paul had early intentions of going into finance, but the Great Depression brought him back to his hometown where he eventually took over the family business, Korff Lumber. Glenn’s mother, Esther, who was a graduate of Doane College, was a teacher in Hebron. Glenn’s parents were very involved in their local community. They were great role models for their sons. This contributed to Glenn’s love for finance, the arts, and Hebron.

Glenn earned his Bachelor of Science degree at UNL and an MBA from the University of Pennsylvania’s Wharton School of Finance. He served in the US Army Reserve for six years, and from 1974 to 1992 he worked for Goldman Sachs international investment bankers in New York. Throughout his life, fitness played a key role in Glenn’s life. He was an avid runner and even ran the Boulder Bolder 10K in Colorado just months before his death in August 2013.

From the beginning, the Korff family has been a part of the hospital’s history. In April of 1946, the Hebron Chamber received an offer to purchase the Theodora dormitory building from the American Lutheran Church with the stipulation it would be used as a hospital. Paul, Glenn’s father, along with M.L. Christensen, J.K. Musgrave, G.R. Taylor, W.E. Baker, and W.F. Powell hurried to sign the initial agreement to purchase the building for $4,500. The financing of the project then fell on the shoulders of Thayer County residents. With the help of the chamber, $35,000 was raised to remodel the building into a hospital.

The new Korff Family Rehabilitation and Wellness Center will be a lasting legacy to Glenn’s love for Hebron, fitness, and the hospital. His estate wanted to be a part of this project because it was a way for Glenn to continue to give back to his hometown. It will also have a positive impact on the overall health of local residents in Thayer County for generations to come.

“Glenn loved Hebron and Nebraska and what they stand for. He wanted his giving to inspire others while improving the lives of others. Glenn and I were raised to work hard, get involved and be charitable. Glenn would have wanted this gift to be significant, but not large enough to cover the entire cost of the project. He knew it was important for the local communities to step up and help in funding this endeavor. Glenn would want his gift to serve as an incentive to bring others to give of their time, talent and treasure. All of us have an obligation to improve the communities we live in. Even if you don’t have a lot of money, you can still get involved. I especially encourage those of you from Thayer County that no longer live here to continue to remember your roots and give back if possible.” -Ken Korff