At Thayer County Health Services, our Pharmacy Department plays a key role in the treatment of our patients.

Our pharmacists are members of our patients’ health care team, working closely with patients, physicians, nurses, and other health care professionals to provide optimal drug therapy. They monitor every stage of medication therapy to improve all aspects of effectiveness. They also provide crucial quality checks to detect and prevent harmful drug interactions or reactions and potential mistakes.

The pharmacy has been a part of TCHS since 1999 and includes two pharmacy departments: the hospital and a closed-door retail pharmacy.

Although it has a slightly misleading name, TCHS has owned and operated the closed-door “retail pharmacy,” in addition to the hospital pharmacy, since 2002. This means that we are not open to the public. Our retail pharmacy is only allowed to fill prescriptions for the long term care facilities and TCHS employees (and their dependents).

The two pharmacies are licensed separately by the State of Nebraska and must maintain separate spaces and inventories.

The pharmacy staff, dedicated to the mission of TCHS, works to provide services county-wide and throughout the surrounding communities.

Michael Logsdon, PharmD, BCGP, Director of Pharmacy, joined the TCHS pharmacy staff in 2017.  He lives in Hebron with his wife Tami and their four children Michaela, Porter, Jade, and Jasper. Michael studied pharmacy at the Appalachian College of Pharmacy in Oakwood, VA and completed residencies at Wesley Medical Center in Wichita, KS and Yale/New Haven VA in West Haven, CT. His focus during training was critical care, infectious diseases, and geriatrics. After residency, he and his family moved to Lincoln, where Michael worked at Bryan Medical Center and Select Specialty Hospital. In his free time, Michael loves to be with his family and enjoys outdoor activities such as camping, boating, and hunting.

Holly Seward,  PharmD, Pharmacist, joined the TCHS pharmacy staff in 2018. She lives in Geneva with her husband Marty and daughters Phoebe and Darbi. She attended Wayne State College for undergraduate studies and completed pharmacy school at the University of Nebraska Medical Center College of Pharmacy in 2013. She worked as a staff pharmacist at Weaver Pharmacy in Geneva for five years prior to joining the TCHS team.

Terry Schaldecker, BS, RP, has been a part of the TCHS Pharmacy Department since its inception. He attended Kansas State as an undergrad and then attended pharmacy school at the University of Kansas.

Marissa Wagenblast, CPhT, joined the TCHS pharmacy staff in 2014. She lives in Deshler with her husband, Wade.

Barbara Remmers, CPhT, has been with the TCHS pharmacy staff for over 20 years. She lives in Hebron with her husband, Dave.

Thayer County Health Services and Priefert Pharmacy have begun a new chapter in providing healthcare excellence to the residents and visitors of Thayer County.  The business name will transition to Thayer County Pharmacy and operate in the existing Priefert Pharmacy location at 428 Lincoln Avenue.  TCHS is committed to ensuring the transition occurs with minimal interruptions.  Pharmacy hours will remain
the same from 8:30 am to 5:30 pm weekdays and 8:30 am to 1:00 pm Saturdays.  Closed on Sunday.

The current Priefert Pharmacy staff will continue to provide the same level of high-quality care while being welcomed as new employees of Thayer County Health Services.  TCHS would like to recognize Jack Priefert and his staff for their dedication and hard work over the years.  Priefert Pharmacy, a downtown Hebron business since 1992, has been a fundamental asset to the community in providing expert pharmacy care with kindness and respect for all who walk through their doors.  TCHS and now Thayer County Pharmacy will continue to provide comprehensive healthcare and wellness close to home for years to come. 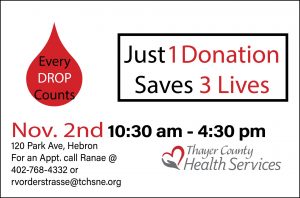 There is a CRITICAL NEED for blood because blood drives are being canceled due to COVID-19. The blood drive will be held in the Stastny Conference Room at TCHS. The Red Cross is taking extra[...]
View Calendar
Add