Our mission is to improve the lives of those we serve by providing exceptional, patient-centered health care. Read and watch our patient stories below!

Jerimy Clift – When Jerimy Clift, MetalQuest employee, received his corporate wellness results, he didn’t put much stock in the results of his first wellness screening at MetalQuest. He figured it was just a one-off, but when the second year’s results came back with the same issues, he knew it was a real issue and that he needed to do something to take charge of his health. Read Jerimy’s story here.

Jimmie Davis – When Jimmie injured his knee, he knew exactly where he wanted to go for his total knee surgery – Thayer County Health Services. One of our visiting Specialists performed the surgery on-site, and Jimmie was thrilled because it meant his family didn’t have to travel far to take him to appointments. Watch Jimmie’s story here.

James Edwards – When James had an accident and needed an emergency room, he knew where to turn for lifesaving care. Thayer County Health Services is the only Level IV Trauma Center in the region and was able to provide preliminary trauma care for James and get him the care he needed at a larger trauma facility. Watch James’ story here.

Vicki Enghauser – Vicki grew up in the area but then moved to Omaha for 20 years. After returning to the area, she had heard great things about TCHS’ new provider and decided to give them a chance because they were close to home. Read Vicki’s story here.

Mike Georgi – When Mike moved from Endicott, NE to Hebron, NE, he and his family decided they would like to doctor closer to home. When Mike’s provider left TCHS, he followed but ultimately returned and chose Dr. Bryan Hubl as his primary care provider because of the proximity, convenience, and care he and his family received. Read Mike’s story here.

Nancy Hofts – Nancy was diagnosed with cancer, and the last thing she wanted to do was waste precious time, so she did all she could to get her care close to home. Watch Nancy’s story here.

Vicki Haskell – The last thing Vicki wanted was to be stuck in the hospital over the holidays, but a touch of personal care and kindness made a world of difference for her. Jarie Sones, APRN-FNP, recognized that there was a much greater cause for Vicki’s cough, promptly admitted her to the hospital, and even pushed her to the room in a wheelchair to make sure Vicki began her road to recovery immediately. On Christmas Eve morning, she was able to go home and is continually appreciative of the staff who took the time to brighten her day and go above and beyond! Watch Vicki’s story here.

Diane Heying – Diane is the first to say that she wouldn’t be here today without our hospital. An accidental fall led to suspicious lab results that led to emergency services and a touch and go situation. Now Diane is spending her time doing what she loves most – watching her grandchildren grow up and making the world a brighter place through her art. Watch Diane’s story here.

Becky Hulse – After Becky, of Hebron, NE waited a few months to utilize our state-of-the-art 3D mammography machine for her routine mammogram, the results came back with suspicious findings. So, she entrusted her care to Thayer County Health Services, and even though battling cancer is not something she would want to do again, if she had to, she would choose to battle it a Thayer County Health Services. Watch Becky’s story here.

Karla Joe – When Karla, former County Assessor for Thayer County, decided to move to Hebron, she knew her job would require her to live within Thayer County. When determining which community she and her husband would move to, access to healthcare played an important role. Read why she chose Thayer County Health Services here.

Eldon Kassebaum – When Eldon Kassebaum of Hebron, NE, hurt his back and needed medical attention, he turned to Thayer County Health Services. Eldon is fortunate in his health in that he hasn’t had to spend much time in our facility. Still, when he arrived on a Saturday morning in March and was admitted as a patient, he was immediately impressed with the level of care he received. Read Eldon’s story here.

George & Cheryl Lahners – George & Cheryl have been patients of Thayer County Health Services since they first moved to the area. They both had to find a new primary care physician and researched TCHS and asked around. What they found was a place that felt like home where they’ve made life-long friends who provide the personal care they were searching for. Read George & Cheryl’s story here.

Corey Loupin – After a car accident that left him trapped for over three hours, Corey returned to our facility close to home. He began his rehabilitation journey with one working limb, and a few months later was able to walk out of our facility on his own. Watch Corey’s story here.

Robert Putman – Robert arrived at the Thayer County Health Services Emergency Room with a foot issue and was promptly admitted to the hospital that afternoon and remained there for four days. Read about Robert’s experience here.

Arlie Riffle – Arlie has been a patient of Dr. Heinrichs for over two years at Thayer County Health Services. He credits her with changing his life for the better and helping him gain control of his diabetes. Read Arlie’s story here.

Kurk Wiedel – Kurk Wiedel has been a long-time patient and in times of crisis, turns to a place he trusts – Thayer County Health Services. When Kurk’s daughter fell deathly ill, the first place he turned was Thayer County Health Services because he knew from experience that they would care for her not just as a patient, but as an individual and a friend. Watch Kurk’s story here.

Steve Wilke – Steve might not be able to walk without our hospital. Our provider, Dr. Bryan Hubl, recognized Steve’s symptoms and got him the care he needed in the nick of time. Now Steve, after a bit of physical therapy, is able to return to his life and continue to do all the things he loves. Watch Steve’s story here.

Galen “Wink” Winkler – Wink works for Norder Supply and recently participated in Thayer County Health Services (TCHS) Corporate Wellness Program. The program identified risk factors and if one was categorized as having three or more, the program was required if the participant utilized Norder’s insurance plan. Wink had participated in previous years through Norder and expected the same old, same old, but this year experienced something different and in the end, he was very pleased. Read Wink’s story here. 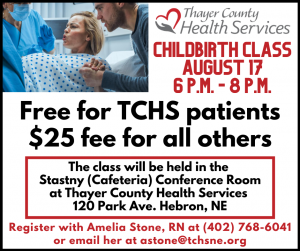 Thayer County Health Services is offering a childbirth education class for expecting parents on August 17th from 6-8 p.m. All participants will be screened upon arrival and will need to wear a mask for the[...]
View Calendar
Add