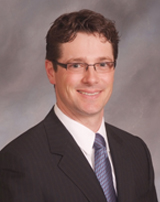 Dr. Adam was born in Hastings and completed his primary education there. He attended Wake Forest University in North Carolina where he received his B.S. degree in 2000. After receiving his doctor of medicine degree from the University of Nebraska College of Medicine in Omaha in 2007, he served his OB/GYN residency at the University of Nebraska Medical Center in Omaha. Following completion of his residency training in 2011, he returned to Hastings.

To make an appointment or for more information please call the Specialty Clinic at 402-768-4696.